Having read Mike’s post on why it makes sense to combine RPA products with Camunda BPM, I got curious about prototyping an example with a specific RPA tool. I decided to work with UiPath since it’s been getting a lot of attention from the community. In this post, I want to share what I learned and what I built during my one-week journey into the world of RPA.

The example can be applied to any scenario where you need to replace manual work (the User Task in BPMN) with an automated task and where an external system — often a legacy graphical user interface — does not provide an API that can be called directly from Camunda. So instead of making a service call to the external system, you would call the RPA tool’s API, let the software “robot” execute the task, then wait for a callback from the RPA tool that triggers the progression of the end-to-end workflow.

You could also think of a use case where multiple RPA flows, possibly even managed by different RPA tools, need to be composed to form an end-to-end process. Camunda BPM can serve as the central orchestration engine here. Camunda BPM would also provide a significant benefit by giving visibility into the overall process as well as by generating runtime-related and historical monitoring data that can be subject to further analysis, using a tool such as Camunda Optimize.

Integrating RPA and Camunda is as simple as making an API call from the workflow engine to the RPA tool and to receiving a callback from that tool so that the workflow can continue.

With UiPath, you can’t call a robot directly, but there is a REST API available for a tool called UiPath Orchestrator. Orchestrator is an application that can be used for monitoring robots, for scheduling jobs, and – most important in this example – for managing work queues. So instead of triggering a robot directly from the workflow, we add a new work item to a dedicated queue. One or multiple robots can fetch items from that queue and work on those items in a distributed manner. The work item itself contains all the context data from the workflow that’s needed for task completion.

The robot acts as an agent on a machine that can access the legacy UI and needs to have the RPA process deployed. Once that RPA process is invoked on a robot, it will start interacting with the legacy application. You can trigger the robot manually by using a job in Orchestrator or by launching it from the process designer, but invocations can also be scheduled by using Orchestrator.

The actual RPA process is modeled with UiPath Studio, which uses a non-BPMN, proprietary flow-chart-like notation with quite complex configuration options for each step. The main stages of the RPA process consist of fetching the queue item, performing the work, and sending the result back to the Camunda workflow.

The overall architecture as seen from Camunda’s perspective looks like this:

Executing the end-to-end workflow begins with starting a new process instance in Camunda BPM. This results in some demo data being generated and in sending a POST request that contains the payload needed to perform the RPA flow (variables and message correlation id) to UiPath Orchestrator:

Next, the workflow waits for a callback from the robot. We can also see that the new queue item was created in Orchestrator (highlighted in red):

The next step is to launch a robot that can fetch the item from the queue. In my demo, I start it locally from UiPath Studio. The robot will then execute the following flow: 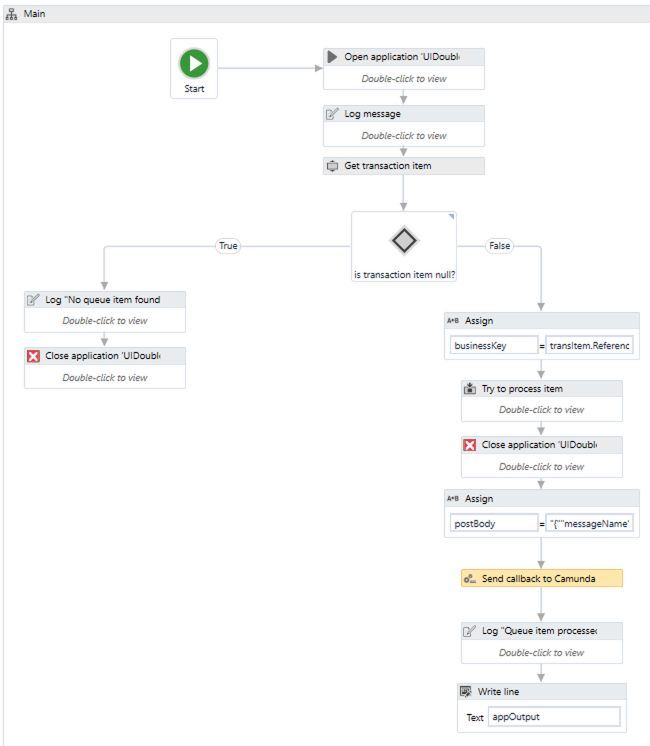 One of the steps will call a sub-flow (the activity called Try to process item) that will make the robot interact with a sample application: The robot fills out some input fields using the data that was provided from the queue item, clicks the accept button, and retrieves the transaction number in the top right corner of the application. It will report back to Orchestrator that the item was processed successfully …

… and will finally send the callback with the result (in this case the transaction number) to the Camunda BPM workflow:

When it comes to integrating RPA into a Camunda BPM workflow, there’s really no difference compared to an integration with any other service. All the integration requires is an API on the RPA vendor’s side combined with one of Camunda’s ways of interacting with third-party systems – be it asynchronous messaging, synchronous service calls or external tasks.

Camunda is responsible for orchestrating the end-to-end process, which could include one or more robots, and the engine could even take over certain functionality where the RPA tool might be limited, e.g., error handling or retry behavior. For this scenario, all you need to do is add the standard BPMN patterns to your model: 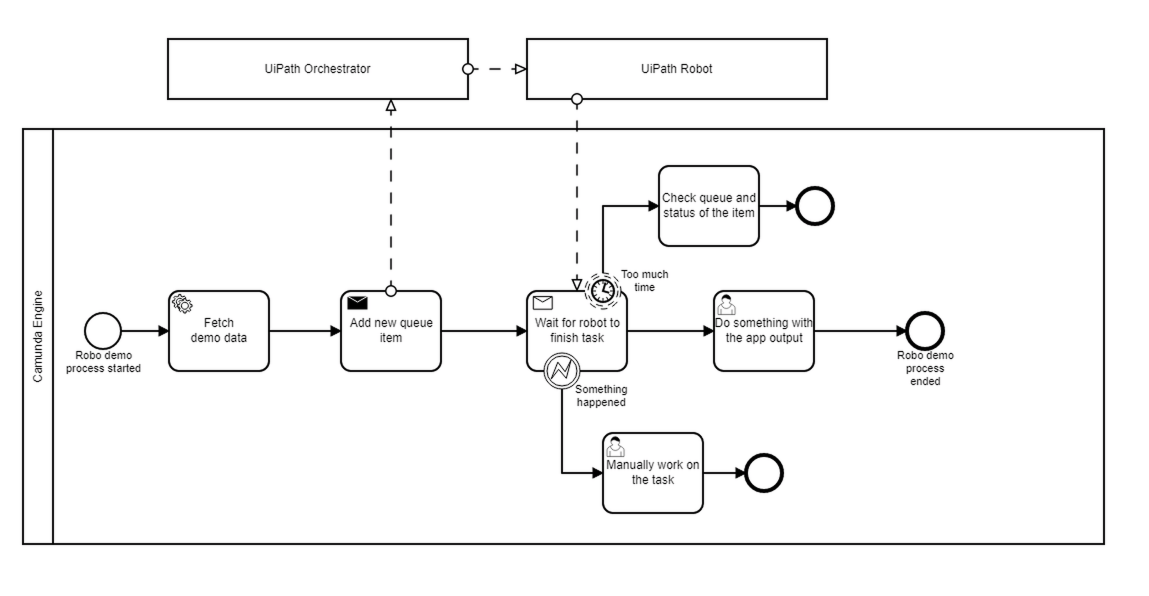 If you are interested in seeing the showcase in action, you are invited to check out my screencast, where I do a live demo and show all components in more detail.

Also, I plan on trying out a couple of other RPA products with a similar scenario, so stay tuned for future follow-up posts!

If you’d like to get in touch with me about the topic or provide feedback and ideas, feel free to reach out over the usual channels or start a discussion in the forum. Also, there will be a dedicated slot for RPA on this year’s CamundaCon, and I hope to see you there!