The Camunda BPM Platform supports versioning of process and decision definitions. Whenever you deploy a modified definition to the engine it will automatically increase the version of this definition.

Before this release Optimize already allowed you to create reports for a single version or for all versions at the same time.

For many use-cases users need more flexibility for selecting versions for a report. Hence with this release we allow the user for the first time to select multiple versions of the same definition when creating a report.

The Camunda engine additionally allows you to tag a process definition with a version tag attribute. This allows to make small fixes or changes to your definition and keeping a business-related version at the same time. The version tag is already visible within Cockpit, Modeler as well as in different APIs.
With this release we add the Version Tag to Optimize, too. This allows users to select all definition versions with the same Version Tag for a specific report.

In addition to that we added support for selecting the latest version of a definition automatically. This feature is especially useful in situations when you regularly deploy new versions of your process or decision definitions but always want to look at the latest version in your reports. In the past you had to update all reports manually after a deployment if you wanted to achieve the same effect.

The above mentioned features can be seen in following screen: 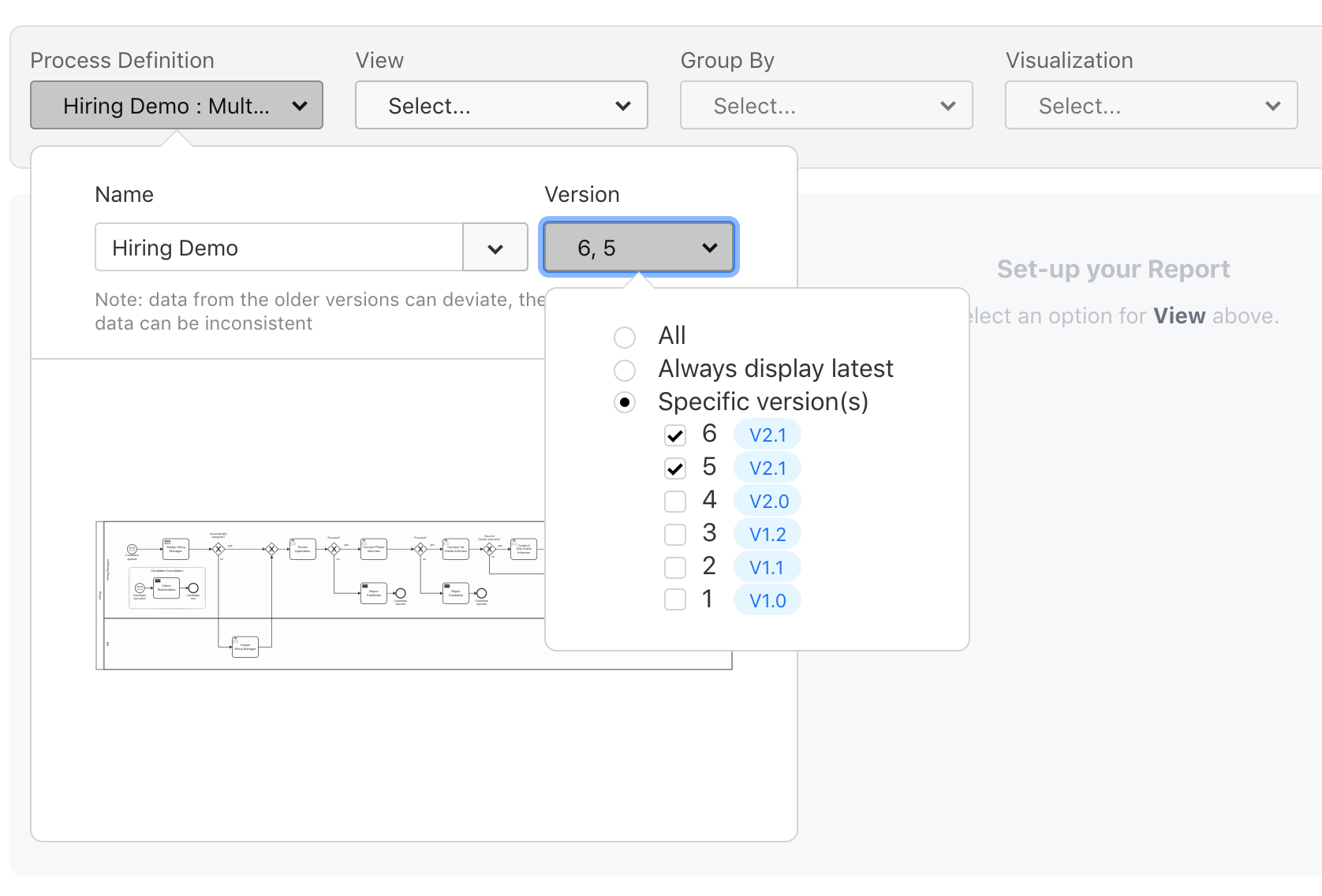 With this release we allow users to look at the duration of running process instances.

Before this release we added multiple features which support you analyzing User Tasks including information regarding assignees, candidate groups as well as idle, work and total durations. Based on these features you were able to look at the running and completed user task counts and durations per user which allowed you already to see how much workload a current user has and how many he completed in the past.

With this release we add the possibility to distribute this information additionally by User Tasks which helps you to see which User Tasks of the Process your users are working on or have completed in the past. To allow both (distribution by User Task and no distribution) we added a new option in the configuration popover as you can see below:

Sometimes you might want to look into completed User Tasks and analyze how many User Tasks have been completed by which assignee. This is possible by changing the Flow Node Status to completed in the configuration popover.

The same functionality is also available for durations.

The next alpha of Camunda Optimize 2.6 will be released End of August 2019.

After the next alpha release, we’ll release the minor Camunda Optimize 2.6 at the end of the third quarter 2019. Stay tuned.

Please note that alpha releases are not intended for production usage.

If you’re new to Optimize, we recommend that you watch the Getting Started with Optimize in less than 5 Minutes video.