As usual, if you’d like to get started immediately, you can find information about it directly on the Zeebe & Operate documentation website.

Here are some highlights:

In the rest of this post, we’ll go into more details about the changes that the latest stable releases bring.

It is not possible to upgrade a system with running state to Zeebe 0.23.0 from a previous version. Zeebe broker snapshots in 0.23.0 are incompatible with previous releases. You must drain the system’s running state, and stand up a new server.

The other biggest news that has us excited as part of 0.23.0 is the replacement of JSON path expressions by the expression language FEEL!

FEEL stands for Friendly Enough Expression Language, and it is a simple, powerful language that has its origin in the OMG’s DMN specification. It is designed to be side-effect free, to use a simple syntax designed for a wide audience, to provide a simple set of primitives (numbers, strings, dates, lists, and contexts), as well three-valued logic: true, false, and null.

Expressions can be used on the following element attributes (with more to come!):

This also introduces some subtle differences from the previous JSON path expressions:

You can learn more about the new expression support on the Zeebe documentation website.

As mentioned before, this replaces our previous JSON path expressions. Existing workflows will therefore need to be migrated. To ease the migration process, there is a tool available on GitHub.

The migration can be done using a migration tool:

You can also manually migrate your workflows via the following steps:

One of the biggest changes this release is the adoption of Spring Boot to bootstrap the Zeebe distribution applications, namely the broker and the gateway. While the core components of Zeebe still do not use Spring in any shape or form, the distribution adopts Spring to standardize its configuration mechanism.

What this means is that we will drop support for TOML configuration files, and from now on both the broker and the gateway can be configured via all configuration providers that Spring Boot supports: properties, command line arguments, environment variables, external YAML files, etc.

You can learn more about the new configuration system and how to migrate your existing TOML files on the documentation website.

The snapshot format has changed in 0.23.0 and is not backwards compatible with previous versions. The changes were specifically to help us support backwards compatibility and ease of upgrade in the future. Under the hood, Zeebe uses RocksDB to store aggregated state for each partition. Previously, values stored there were serialized using a mix of different approaches; this was now standardized to MessagePack, which should give us more flexibility in the future when it comes to schema changes.

Up until now, the Zeebe broker offered a single ready check HTTP endpoint (by default at http://zeebe-broker:9600/ready) which one could use, for example, to define a Kubernetes readiness probe. There is now an additional HTTP endpoint on the Zeebe broker (by default http://zeebe-broker:9600/health), which reports the overall health of a single broker (not to be confused with overall cluster health). If the broker is healthy, it will return an empty 204 response; if it is unhealthy, it will return a 503 error.

But what is the health of a broker? If a broker is healthy, then it means that it can process workflows, accepts commands, etc., perform all its expected tasks. If it is unhealthy, then it can mean three things: it is only temporarily unhealthy (e.g. due to environmental circumstances such as temporary I/O issues), it is partially unhealthy, or it is completely dead.

Under the hood, this was done by breaking the health of the broker as the combined health of its partitions. Each partition, in turn, monitors further components and reports their health. This essentially creates a supervision tree, allowing us to more easily pinpoint which components have failed. This is exciting, as although Zeebe can already tolerate crash failures, it currently does not automatically recover from partial failures. This lays the groundwork for major improvements in that aspect.

You can read more about this on the Zeebe documentation website.

As part of 0.23.0, we’re happy to report that both the Go and Java official Zeebe clients are now fully OAuth2 compliant. Thanks to our user dbarentine for reporting the issue. You can read more about the issue and its fix for the Go client and the Java client on GitHub.

For those deploying Zeebe on Google Cloud (such as our very own Camunda Cloud), Zeebe now offers the option to output its logs directly in a format that Stackdriver can ingest seamlessly. To enable the Stackdriver integration, you have to set the environment variable ZEEBE_LOG_APPENDER to Stackdriver. You can read more about the configuration in the Zeebe documentation.

Note: Please note the new version number of Operate. With this release we
change the release version number to align with Zeebe. This leads to the
“strange” moment where you as a user upgrade from Operate 1.2 to Operate 0.23.
We think it is better for users to have the same version number for both
products and decided to do this step now instead of waiting longer.

The new operations panel in the instances list view replaces the selections
panel. The old selections panel had some limitations in it’s usability and did not
give the user any visibility of the progress in case an operation was triggered.

With the new operations panel we remove the ability to create multiple
selections of instances and then execute operations on them, and focused more
on the visibility of running and finished operations. For every operation trigger inside the application, i.e. cancel, retry or edit
variables, a new entry in the operations panel is created. The item reflects
the current progress of the operation, the creation and end time. The operation
also contains a link back to the affected instances, in case the user wants to
drill into or execute another operation on the same set of instances.

With the latest release of Operate the details view will now highlight the sequence flows which where taken in the process. This makes it easy to understand which path in the process was executed. 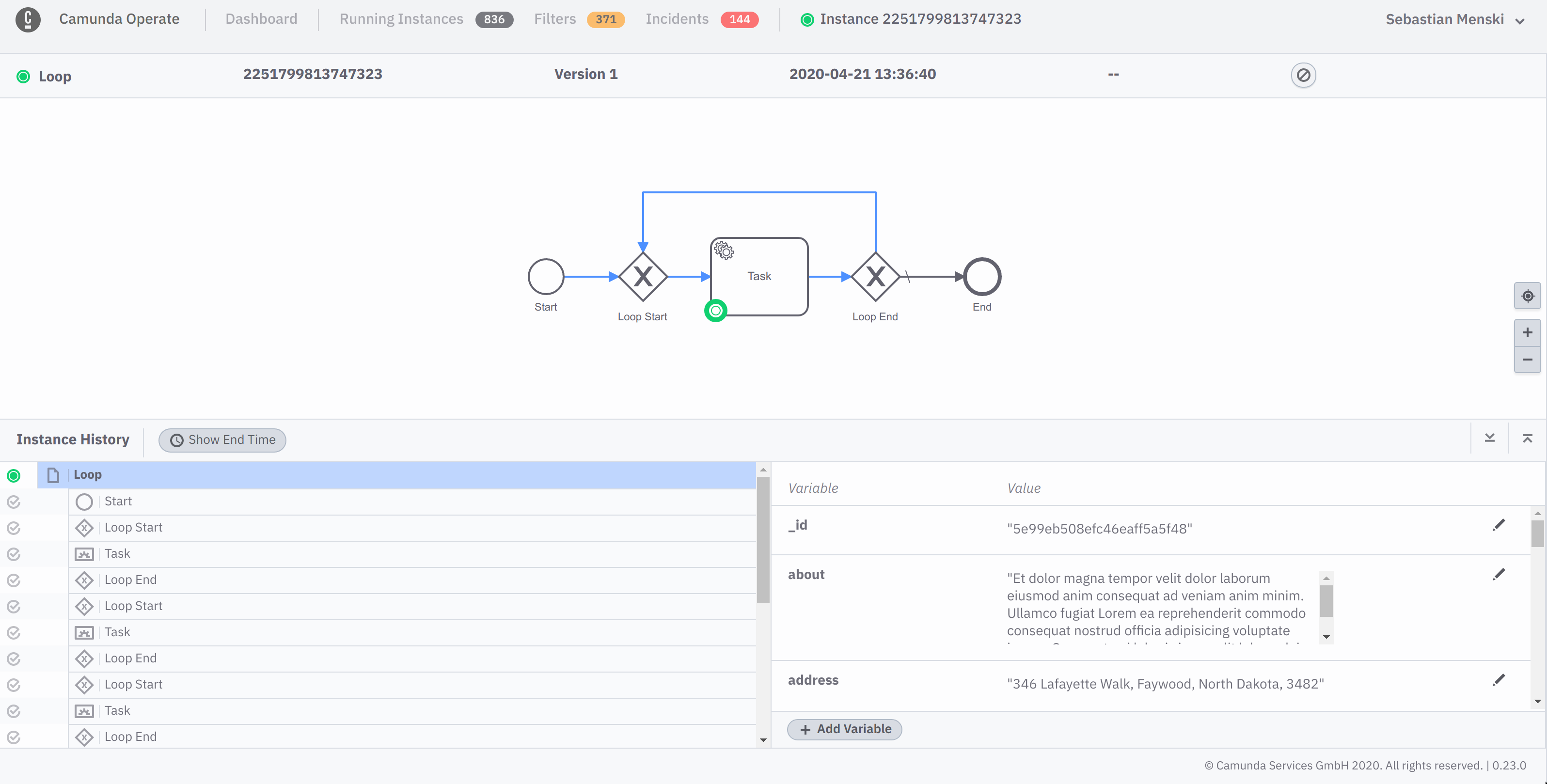 To allow users to migrate from one version of Operate to the next one we now ship migration scripts with every Operate release.

That means you might need more disk space during the migration.

You can use the Operate docker container as init container and as main
container when running Operate in a Kubernetes environment like Google Cloud.

The init container checks the version of stored data in Elasticsearch and
migrates it to the current version if necessary. If the new version of data
already exists, then no migration is performed and init container quits
successfully. Was the init container successful executed, then the application
Operate will be started (main container). Details about migration can be
found in the Operate deployment guide.

The latest release completes the support for error events by adding the new error end event to the list of supported elements. You can read more about error events in the Zeebe documentation.

To reduce the round trip time from modeling to deploying and executing a new workflow the modeler now has two new features.

When pressing the “Deploy current diagram” button a modal window will open, which allows you to enter the connection details of your Zeebe cluster. After you successfully deployed your new model you can even start a new instance directly from the modeler by pressing the “Start Current Diagram” button.